"THE BONDPIVOTS.COM NEWSLETTER" IS IN ASSOCIATION WITH THE MARKET ALPHA NEWSLETTERS GROUP'S FREE ONLINE CONSOLIDATED VERSION FOUND AT "THE MARKET PIVOTS FORECASTER AND ACTIVE ADVANCED POSITION AND RISK MANAGEMENT NEWSLETTER" BY MARKET-PIVOTS.COM AND BRIGHTHOUSE PUBLISHING

Positioning for change, staying ahead of the curve, we're keeping watch for you." 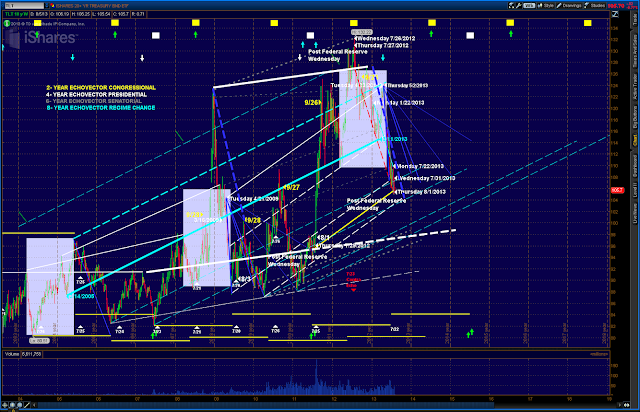 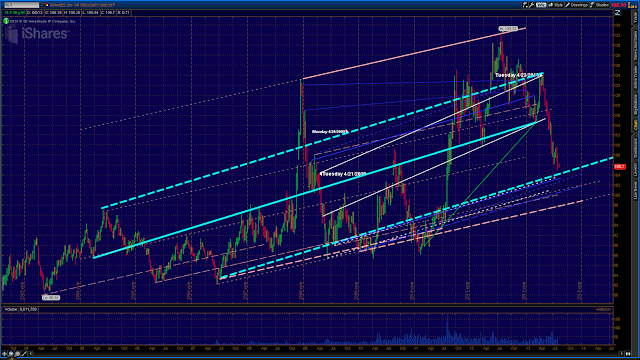 Disclosure: I am long TLT. I have a short-term swing trading long position opened in TLT last week. I may add to this position in the coming week, or cover this position, depending on how this coming week's price action progresses. (More...)
Treasury long bond prices have seen difficult times recently. Since the beginning of May this year, and shortly after the Federal Reserve hinted it was developing a schedule for winding down its $85 billion per month bond purchasing program, Fed "tapering" speculation hit the bond market hard. It sent the price of bonds down rather quickly and quite dramatically. An 8% drop occurred during just that first month of May, from about $124 to about $114 as measured by the TLT ETF.
Although the Fed has since attempted to mitigate its language and posture to indicate that purchasing will remain steady, the bond market has continued to weaken further. Investors have elected to continue their strong preference for rising stocks. June remained poor for bond prices, seeing The TLT dropped another six points from $114 to $108, and set up an additional early July drop to nearly $106 before the damage to prices seemed to halt.
Many articles followed, with some analysts seeing bonds stabilizing and again "becoming a buy," while other analysts warned of continuing price weakness into the end of the year -- and potentially beyond. On balance, treasury long bond prices did stabilize through much of the remainder of July, finding continued technical support in this new price range.
However, last week's midweek Federal Reserve activity apparently provided little additional lift to bond prices; in fact, bonds broke down to new annual lows the very next day, on Thursday, before ending the week. Thursday's better-than-expected ADM payroll number and ISM manufacturing number also appeared to be catalysts for the breakdown. Friday's worse-than-expected job numbers and further moderating comments by the St. Louis Fed President on Fed tapering helped halt Thursday's strong dire-looking bond price down-pressure and continued downward momentum, at least going into the weekend.
In this context, today is a good day for review of a price chart of the treasury long bond from an EchoVector Pivot Point Analysis Perspective. We're looking for occurrences of possible price symmetries that may be forming within this past week's and month's context, and to review these symmetries' potential trading implications. This coming week is sure to be a significant week in the bond market. In this analysis, I will review two primary EchoVector Pivot Point Perspectives for their price symmetries and for their individual and combined trading implications.
The first echovector perspective is a four-year daily price action chart of the TLT that highlights a current key active presidential cycle echovector and a "fan" of potential echo-extension vectors from a key presidential cycle echo-back-date, for context. The second echovector perspective is a two-year daily price action chart of the TLT that includes a currently active congressional cycle echovector, which may be about to pivot and on which I will be focusing, and several confirming shorter-term cycle echovectors occurring in parallel that are also of interest. I am using the TLT ETF and its price charts as a proxy for long bond treasuries market price action.
TLT ETF Four-Year Daily OHLC 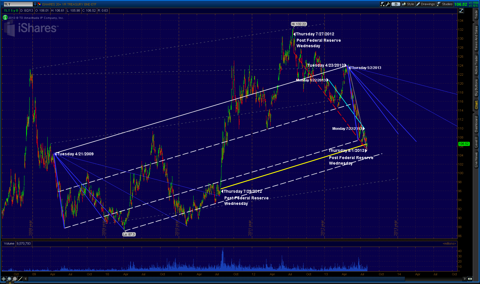 (Right click on image of chart to open image in new tab. Left click on image opens in a new tab to further zoom EchoVector Analysis chart image illustrations and highlights.)
This first chart presents and highlights the key active four-year presidential cycle echovector at work on Thursday, April 23,2103, along with that day's coordinate echo-back-date of Thursday, April 21, 2009. At the time, although many analysts were advancing the position of moving into bonds as an insurance hedge against a possibly overheated stock market, I was instead advancing caution and warning readers of a potential head-and-shoulders pattern in bonds possibly in the making. The wisdom of taking profits on the strong double-long swing trade opportunity alert I had previously issued during week of March 11 was also advanced. In addition, I was suggesting more active bond market participants begin looking into double shorts. This chart highlights the rather overall precarious price pattern of this year in the long bond market within the presidential cycle during its prior period.
A longer-term chart highlighting the eight-year regime change cycle clearly shows the lows of mid-March 2013 and its correlate lows in both 2009 and 2005, as well as, very interestingly, the active coordinate echovector support then each year. The regime change cycle chart also shows the symmetrical price extension levels that occurred and followed in the second quarter of each of those years. They indicate little price advantage going forward into the end either year; in fact, they reveal significant price erosion each of those years instead.
Illustrative charts regarding this additionally revealing longer-term regime change cycle period and its trends, patterns, and echovectors were posted on Seeking Alpha on April 13, and can still be viewed there for "additional context and framework" in viewing, processing, and analyzing this month's coming price action. So far, the price behavior during this current phase of the presidential cycle is behaving very consistently, and coordinately subsumptive to and within this current phase of the eight-year regime change cycle, in which the presidential cycle occurs.
TLT ETF Two-Year Daily OHLC 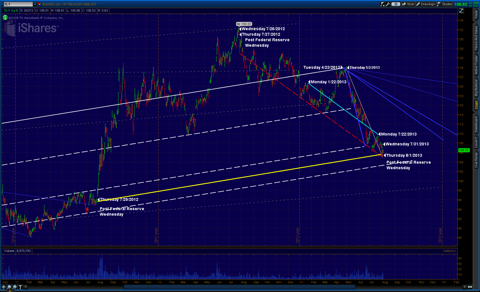 OPTIMIZING LEVERAGE WITH DERIVATIVES AND SYNTHETICS